About For Books The Pride of the Yankees: Lou Gehrig, Gary Cooper, and the Making of a Classic

https://msc.realfiedbook.com/?book=0316355054
"I CONSIDER MYSELF THE LUCKIEST MAN ON THE FACE OF THE EARTH." On July 4, 1939, baseball great Lou Gehrig delivered what has been called "baseball's Gettysburg Address" at Yankee Stadium and gave a speech that included the phrase that would become legendary. He died two years later and his fiery widow, Eleanor, wanted nothing more than to keep his memory alive. With her forceful will, she and the irascible producer Samuel Goldwyn quickly agreed to make a film based on Gehrig's life, The Pride of the Yankees. Goldwyn didn't understand -- or care about -- baseball. For him this film was the emotional story of a quiet, modest hero who married a spirited woman who was the love of his life, and, after a storied career, gave a short speech that transformed his legacy. With the world at war and soldiers dying on foreign soil, it was the kind of movie America needed. Using original scrips, letters, memos, and other rare documents, Richard Sandomir tells the behind-the-scenes story of how a classic was born. There was the so-called Scarlett O'Hara-like search to find the actor to play Gehrig; the stunning revelations Elanor made to the scriptwriter Paul Gallico about her life with Lou; the intensive training Cooper underwent to learn how to catch, throw, and hit a baseball for the first time; and the story of two now-legendary Hollywood actors in Gary Cooper and Teresa Wright whose nuanced performances endowed the Gehrigs with upstanding dignity and cemented the baseball icon's legend. Sandomir writes with great insight and aplomb, painting a fascinating portrait of a bygone Hollywood era, a mourning widow with a dream, and the shadow a legend cast on one of the greatest sports films of all time.

About For Books The Pride of the Yankees: Lou Gehrig, Gary Cooper, and the Making of a Classic 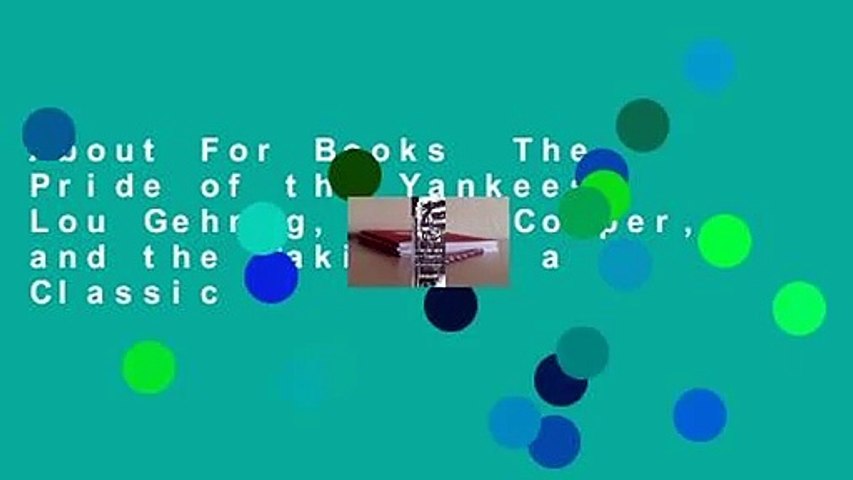